Blog / In Video Production - Every Image Tells A Story

In Video Production - Every Image Tells A Story

And that story is what connects your brand to your audience.

Think of some of your favorite video content or television commercials. There is usually an image, several if it’s really good content, that sticks in your head after you’ve watched it. If your video doesn’t have that image, how is it serving your brand?

I am a lucky guy. Every day I come to work and I get to make up stories alongside some super talented, creative people. As a full-service video production team here are CenterRock, we have blasted clients into space, saved the planet from a meteor crash, created a Hitchcockian thriller, produced fairy tales, and even asked the viewing audience to be nice to one another. All these, and so many more of our video marketing campaigns are not just fun ideas we want to produce —  they are strategically thought out campaigns that do one thing; make a connection—  the most important thing to look for when you’re looking for a video production company. Can they make a connection with my (your) target audience… one that your brand wants to attract?

As Executive Producer and Creative Director (one of 2 at the agency), it’s my job to ensure that everything we create for our clients stays on brand and on the campaign’s message. There is a great deal of thought that goes into each production; locations, actors, wardrobe, props, time of day to capture the perfect light, etc. Each image should help visually tell the story along with the copywriting.

I’d like to walk you through some of my favorite images from the 300+ projects we produced in 2018 and how they connect with the brand’s audience. Each project includes one image and one video ad - either for traditional marketing or digital marketing. I encourage you to click the links of the commercials (simply click the image) later on so you can make your own judgments. We produce a lot of videos each year so it gets crazy, but our team wouldn’t have it any other way.

So in no particular order here are some of my favorite images from our commercials. 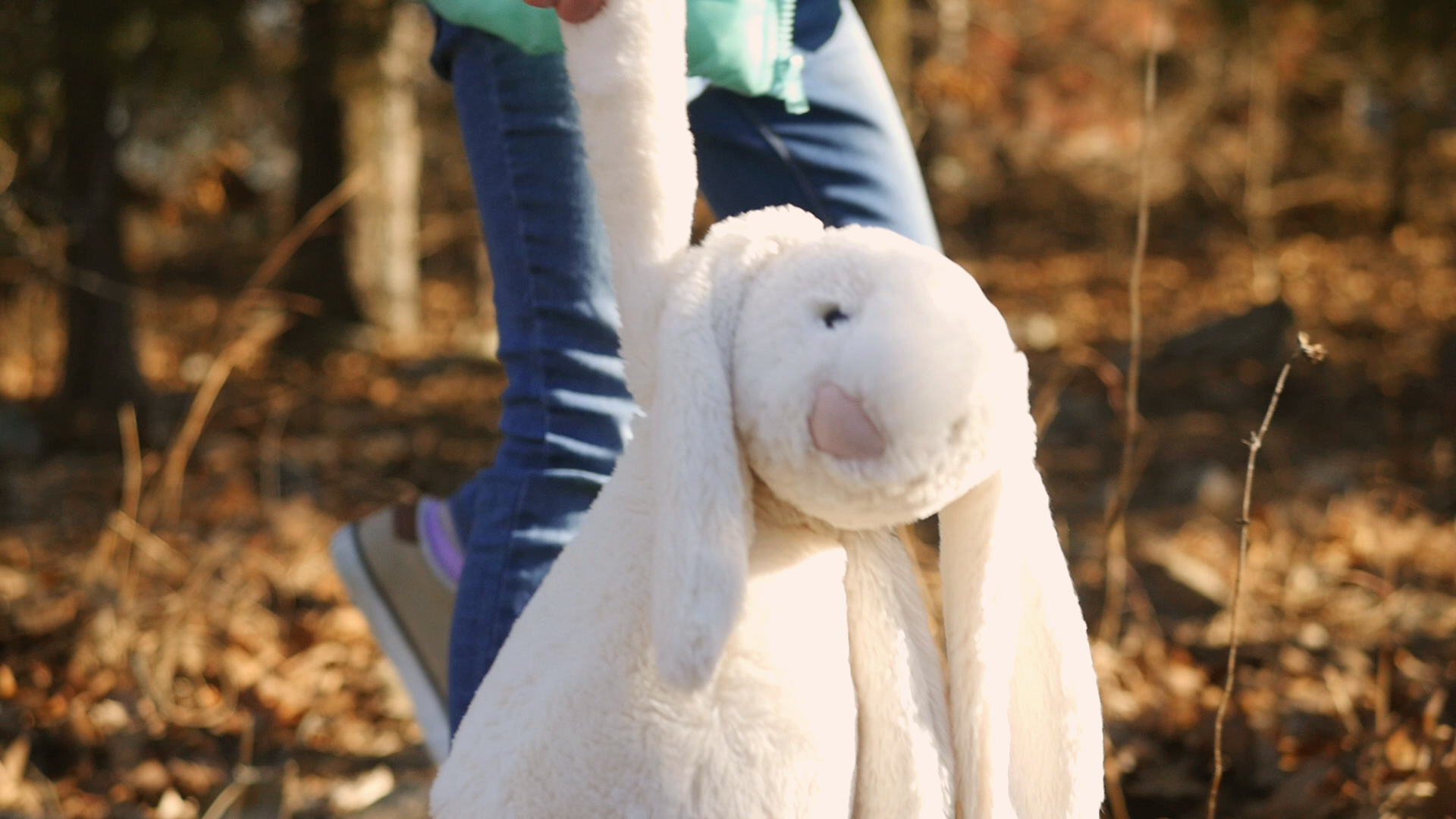 This commercial is one of my favorites because it’s simple and it’s basically telling people to be nice to each other (kind of my life goal). The first line we hear is “When I grow up, I’m going to change the world.” It’s read by an eight-year-old girl with the sound of crunching leaves beneath her feet and windchimes playing in the distance. The stuffed animal conveys innocence. As it dangles over the dry landscape, the viewer is intrigued and wants to know who this little girl is. You can see the bright sun angled perfectly to say the future is bright, as our actor walks confidently towards it. This campaign is about being nice to people and making them happy. The image and the video ad help convey that message. 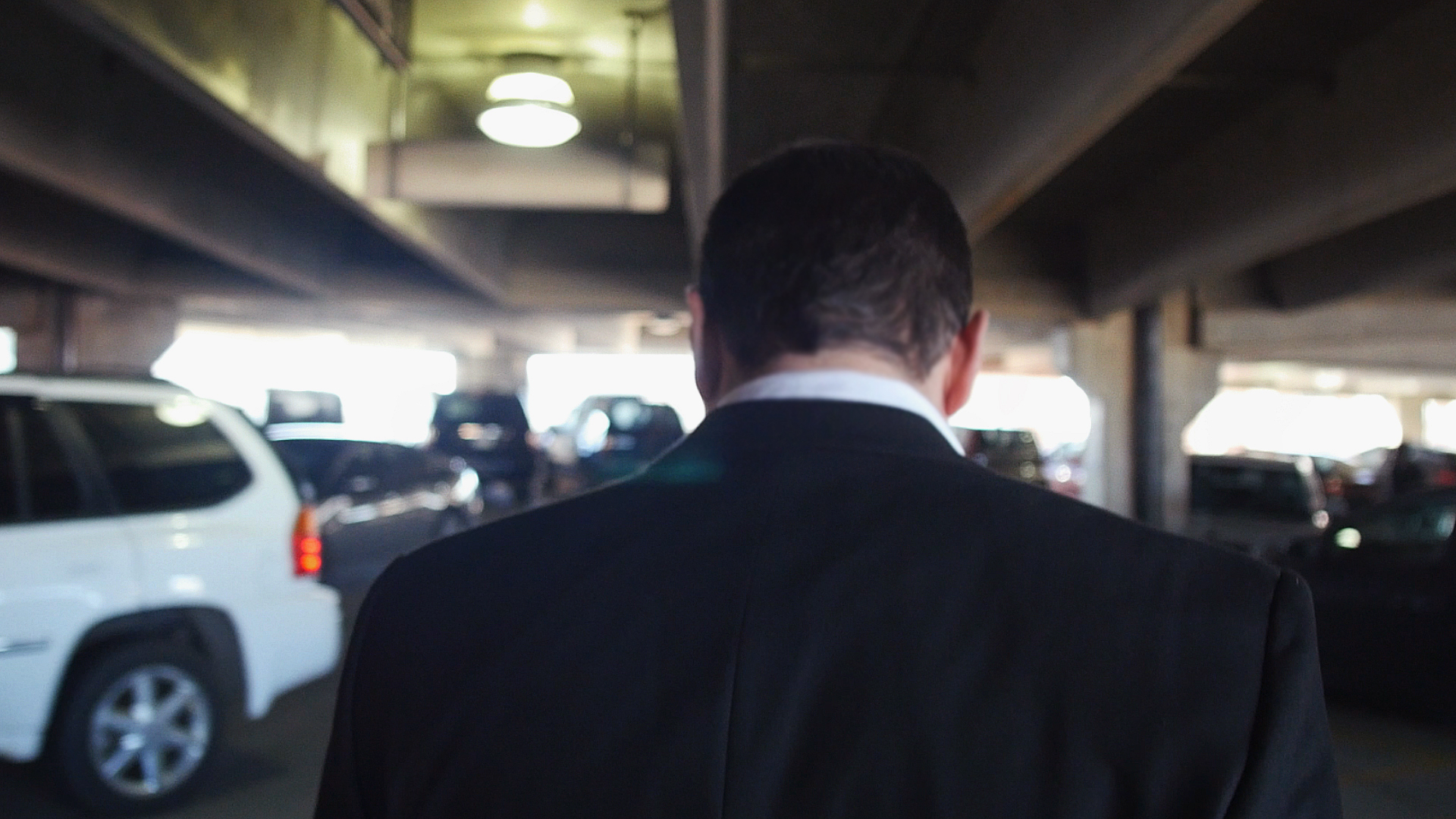 One of the best parts of working at CenterRock Advertising is the incredibly talented people I get to spend my days with. Since the video production department is mainly comprised of filmmakers, when the opportunity to pay homage to Alfred Hitchcock came about, we all jumped at the chance. This is the first image you see in the commercial where a young gentleman walks into a parking garage and starts to panic. A series of jump cuts and sounds make the viewer feel a little panicked as well, wondering what’s happening. Once we hook the viewer, we give them the punchline which is it’s hard to remember where you parked your car, but buying one at our client’s place is easy. And since the campaign is “The Easy Choice”, it works perfectly. 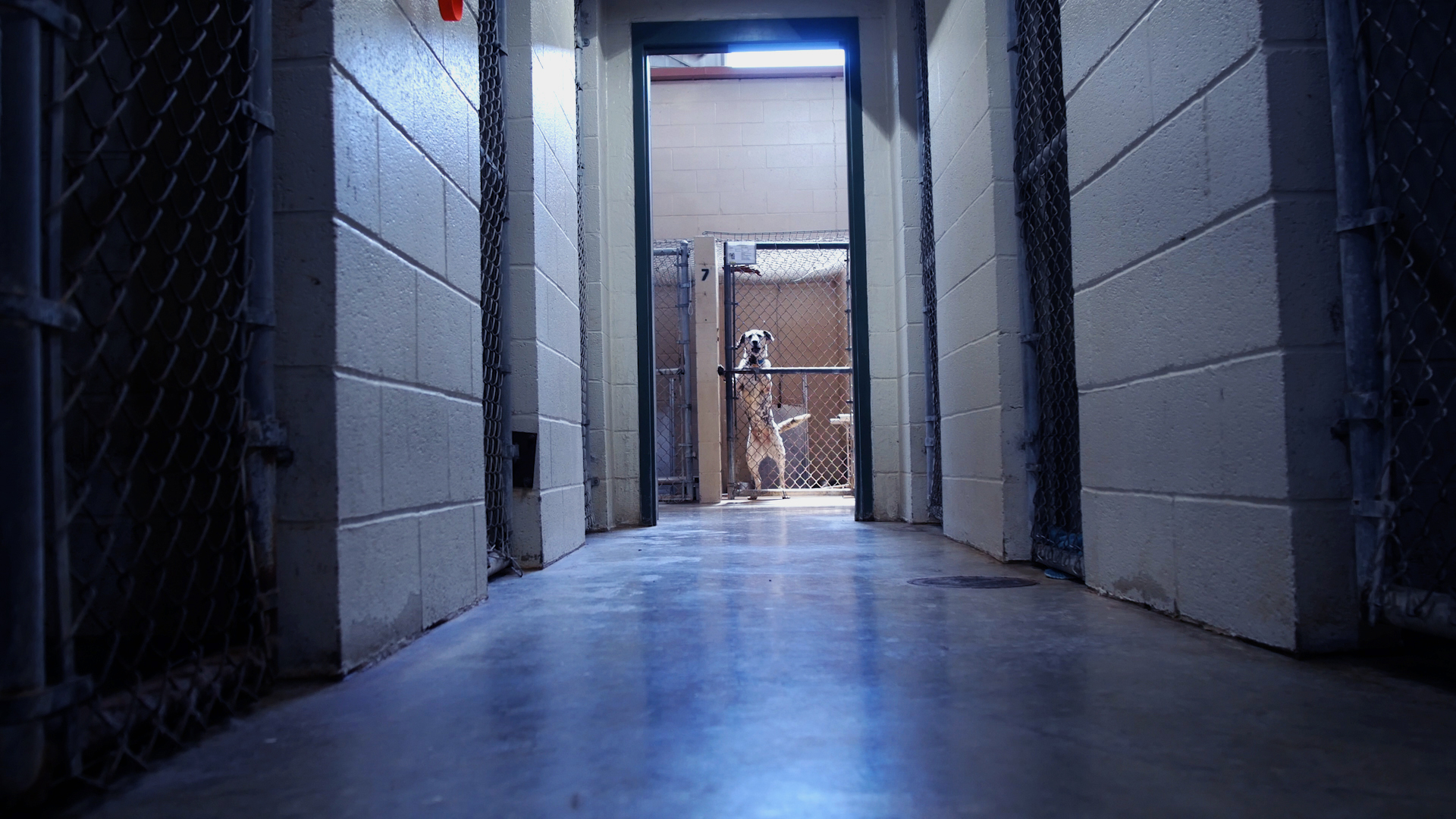 Every once in a while a project comes along that really touches your heart. Here at CenterRock, we’re all animal lovers. If you were to randomly visit our office and you would most definitely see one of our dogs eager to greet you as you walk in. So when the opportunity came along to produce a video for the Pulaski County Humane Society, we were thrilled. They are constantly in desperate need of donations, equipment, and money, so our goal was to create a video explaining how helping the Humane Society would not only change the animals’ lives, but it would change yours as well. The digital media was to be viewed at the yearly fundraising gala. This image, with the long corridor and barking dog at the end feels like it’s calling to you for help… and it worked. They raised a great deal of money during the event, enough to buy some much-needed equipment that will undoubtedly save lives. It warms our heart to know we played a very small role in that. 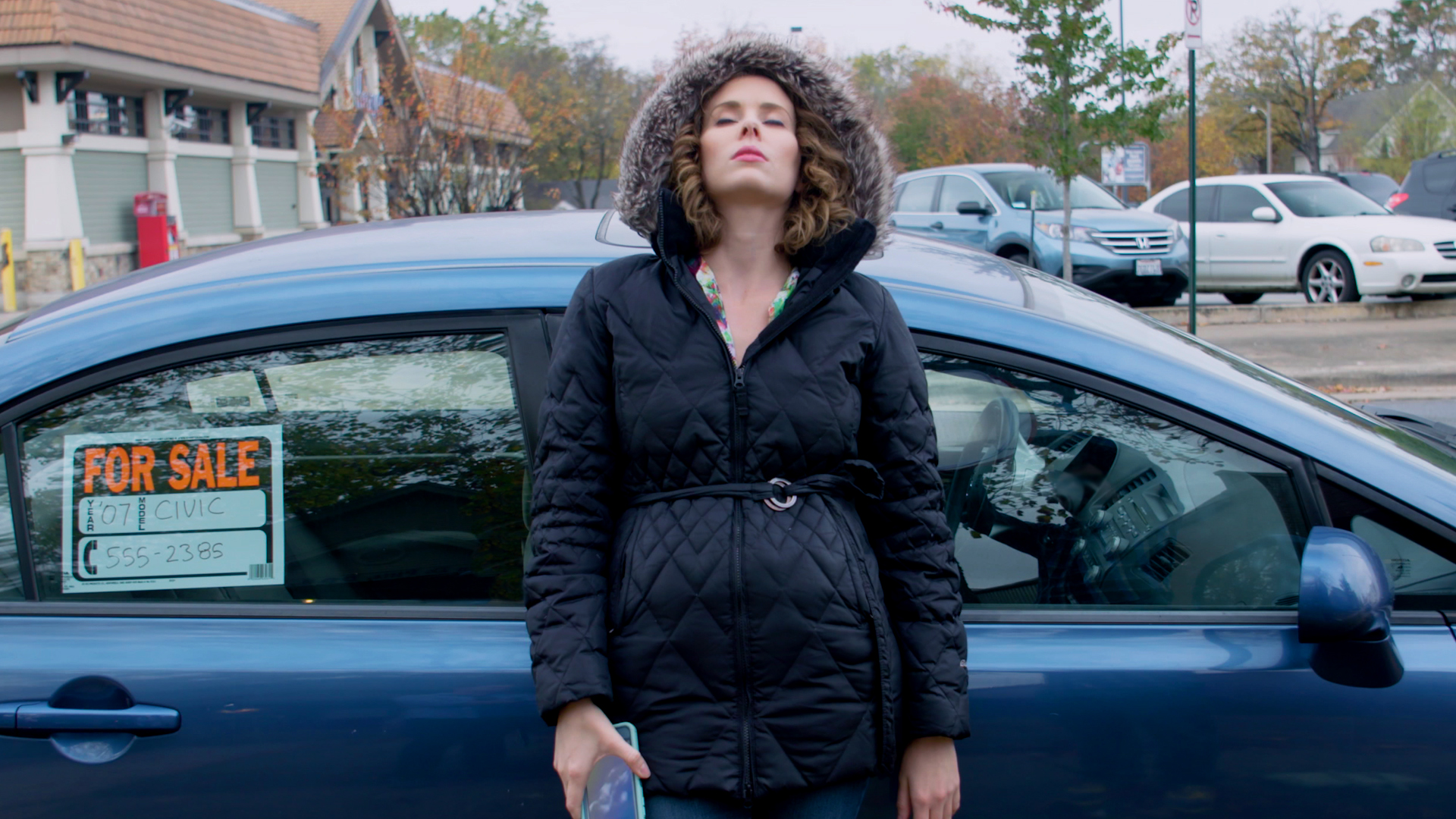 The goal of any production is to be able to convey a story visually, which this image does so perfectly in relation to the commercial. It’s only about a second long but really displays her exasperation in trying to sell her car by owner. It helps to have a fantastic actor who can easily take direction and is willing to stand out in the cold to really get into the character. (Thanks, Anna!) Because it’s on the screen such a short time, we framed her in the center so your eye would immediately know where to look. You know it’s cold from her wardrobe and the sky. And you know that she’s clearly disappointed. The client asked us to show viewers the hassle of selling a car on your own. The image and the entire commercial achieve that goal with a combination of truth and a little humor.

5. "The Night Before Christmas" 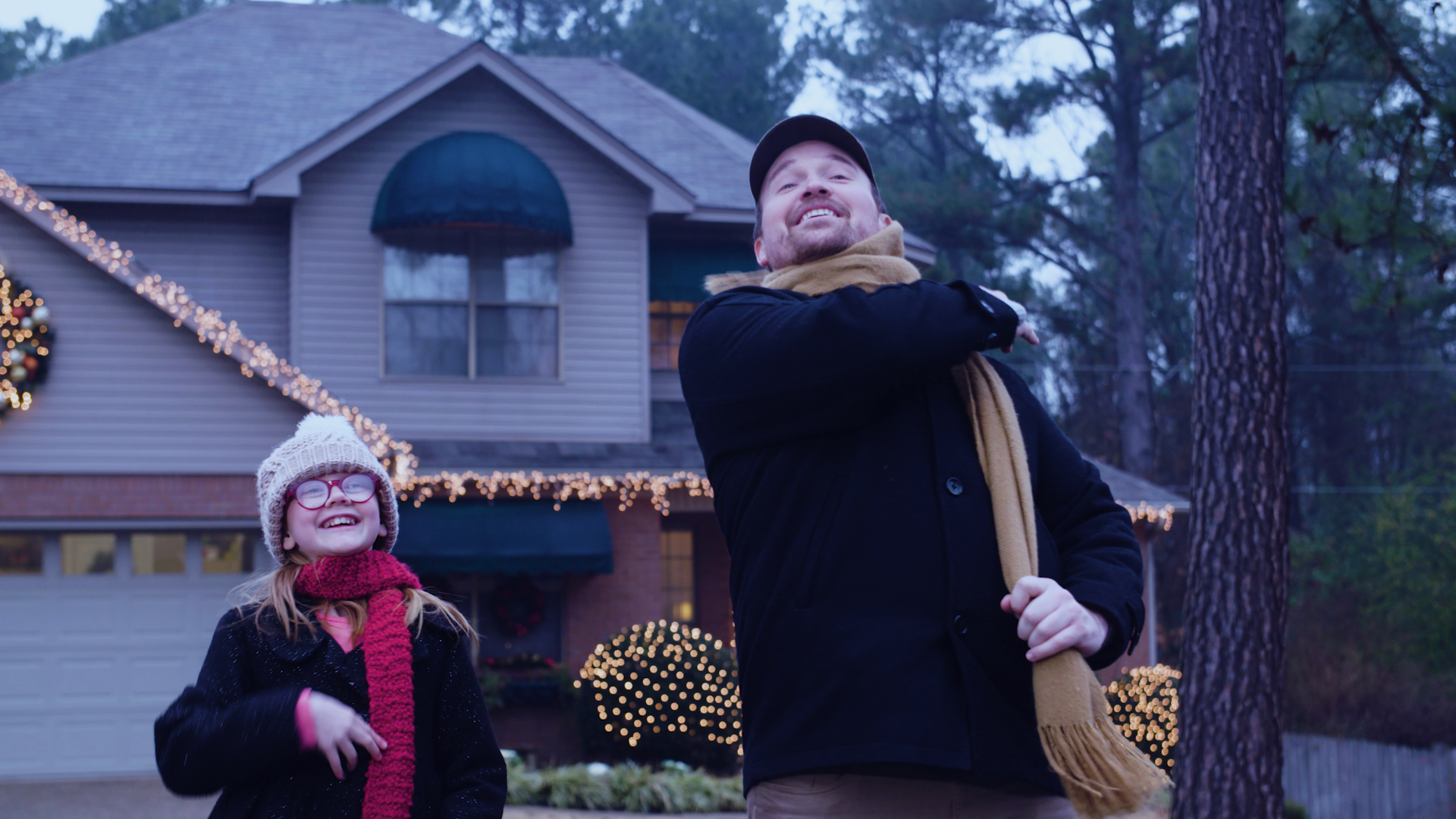 Anyone who knows me knows how much I love musicals and copywriting that rhymes. A few years back, we took the Night Before Christmas story and changed the words for a client. It was so well received that we have produced a new one every year since. It’s not a musical, but there may or may not have been the song “Let’s Go Fly a Kite” playing in my head. The actors walk into the frame, throw their scarves over their shoulder, and rush off to get a gift for Mom. The joy on their faces reminds me of a big musical opening number where we’re introduced to the characters and set off on an adventure. In this case, it’s to find a Christmas gift for Mom which they will undoubtedly find by the end of the commercial.

As you can see from the images and descriptions above, I love what I do and I love my team. So when it comes time for you to search for a video production company, remember to find one that not only tells a story… but that can tell YOUR story. One that speaks and connects directly to your audience. No matter the scope of the project, whether you need videos for online ads, social media, or TV ads, a production agency can get you what you need. I’ll leave you with some advice I got from filmmaker Jason Ritman (Juno, Up In The Air) who is about to write and direct the new Ghostbusters film. He said, “Work with the people you love. Because when sh*t hits the fan, and sh*t will hit the fan… you wanna be standing next to the person you love, not the person you wanna punch in the face.” I love that advice because working with people you love and the ones that are all on the same page, makes the project so much better.